Put away the vampire romance novels or Bram Stoker’s Dracula and come to one of the places it all started: Sighişoara.

Never heard of it?

Well, it’s only the birthplace of the original inspiration for Dracula. Hold your applause, please. 😄

The house he was born in is in the city, as well as a statue of him. You can visit the house, easily one of the best things to do in Sighişoara, for a cheap fee of a couple of Romanian lei (their currency is the Leu) as well as other attractions in the city – making Sighişoara a rather budget-friendly city to visit.

The house is so well-preserved, in fact, that it’s been a UNESCO World Heritage Site since 1999 and is the only inhabited medieval fortress in southeastern Europe as of now. But enough about the house (for now).. 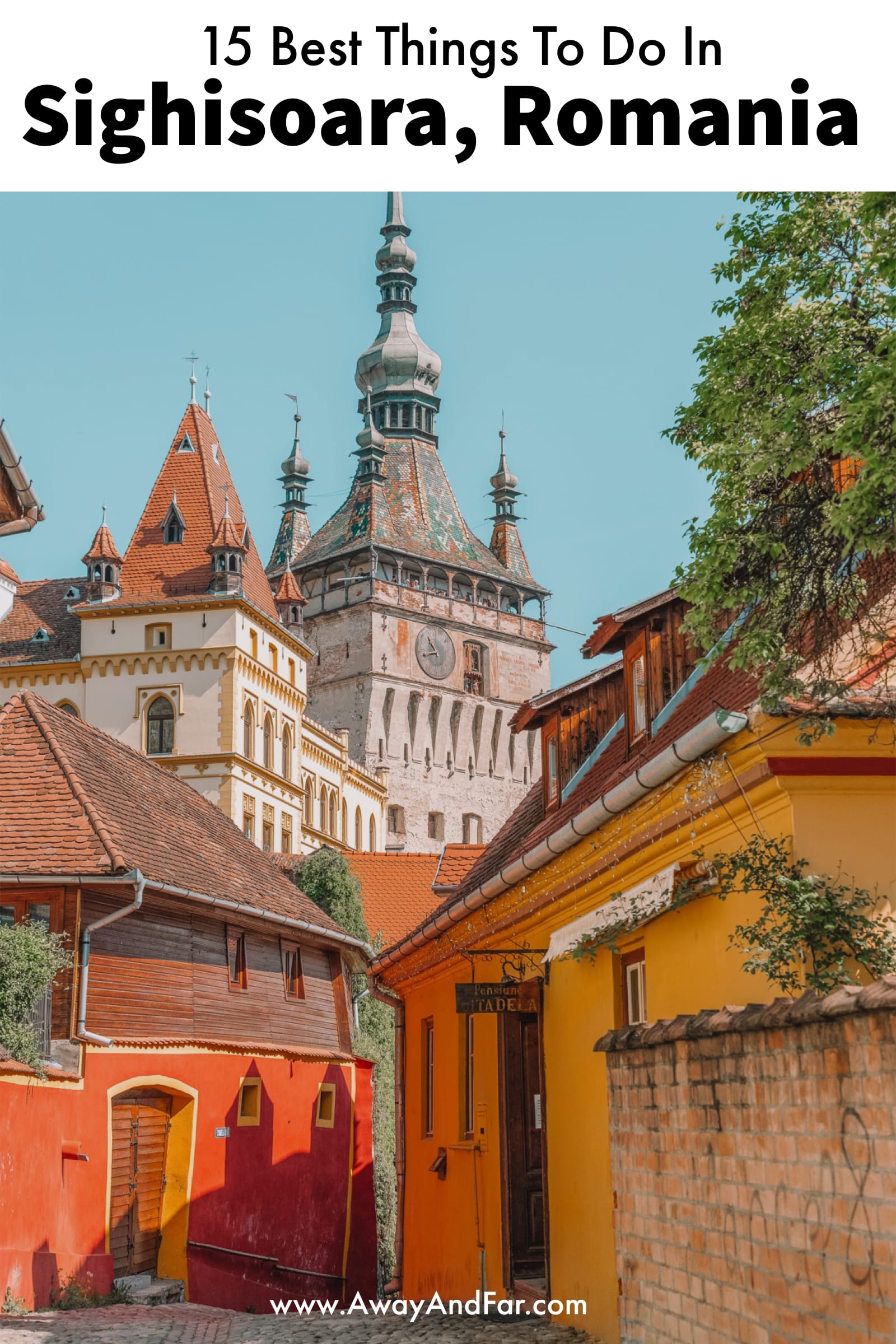 …let’s dive right into all of the best things to do in Sighisoara, Romania!

Located inside the Clock Tower, this is one of the best things to do in Sighişoara, due to its multiple attractions.

The torture museum is also in the Clock Tower, in the same location where prisoners and others were actually tortured hundreds of years ago.

There is a way to buy a ticket for the history museum, torture museum, and arms museum in the Dracula House in case you want to go visit all of them. 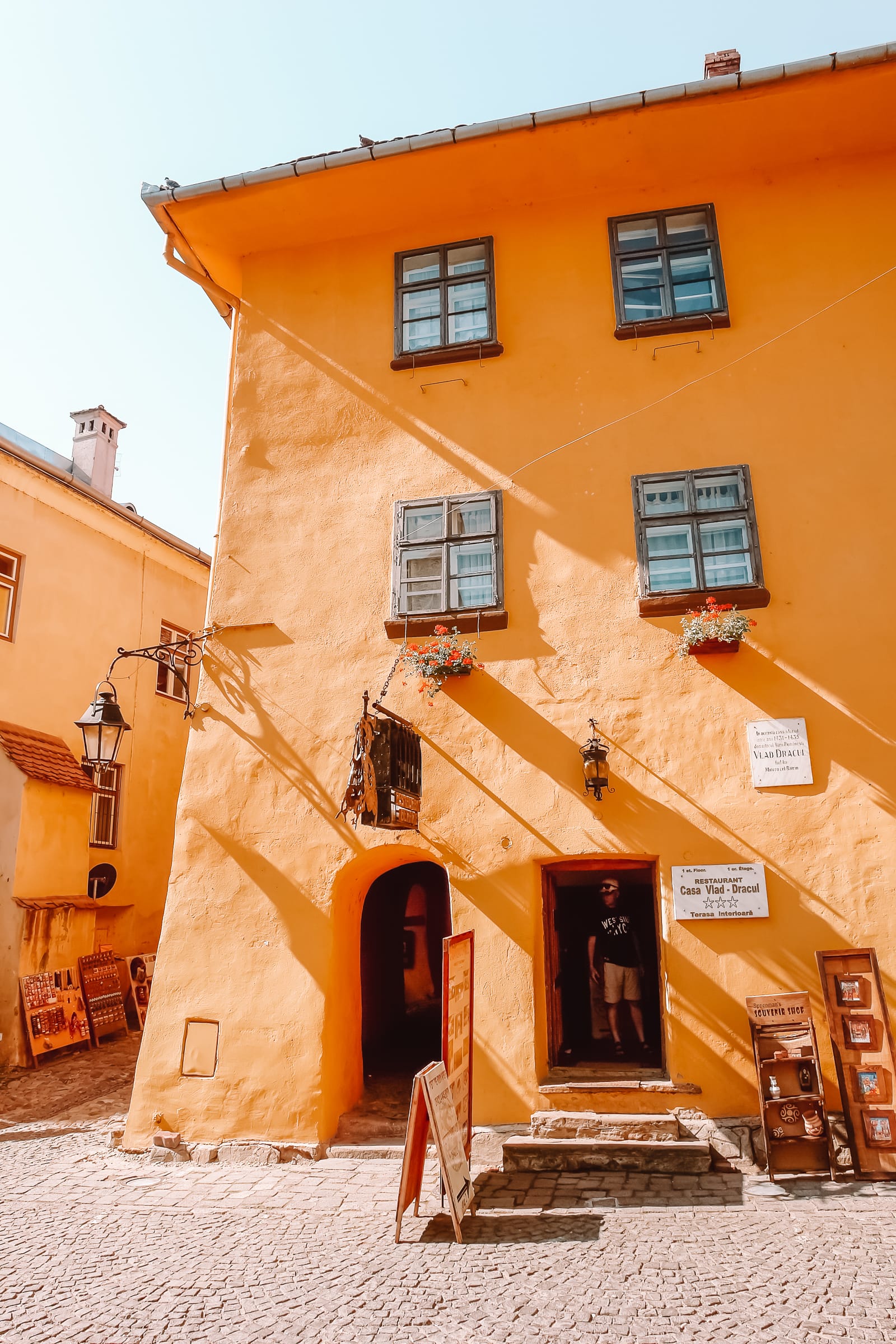 Welcome to where vampires all started. Supposedly, Vlad the Impaler was born in this house in 1431 and continued to live there for his first several years.

His father owned the house, and it’s most likely the oldest in the square since it’s known to have survived the massive Sighişoara fire of 1676.

Today, you can enjoy a weapons museum there and a restaurant once you pass under the iron sign shaped like a dragon over the door.

This wooden covered staircase was built around 1642-1654 with 300 steps coming from citadel square, leading to the Church on the Hill and Sighişoara’s Old School to protect students and others walking through from the winter weather.

Today, students still use the remaining 175 steps to get to school, and others use it to pass through.

Held on the last weekend of July, you might want to book your hotel stay in advance for it and have a Romanian friend or two tag along to help you understand everything.

People dress up as they would have in medieval times, there are sword fights (not real ones, obviously), and there are really stands set up selling medieval-type handmade crafts and performers on the streets.

It’s definitely one of the best things to do in Sighişoara in the summertime. 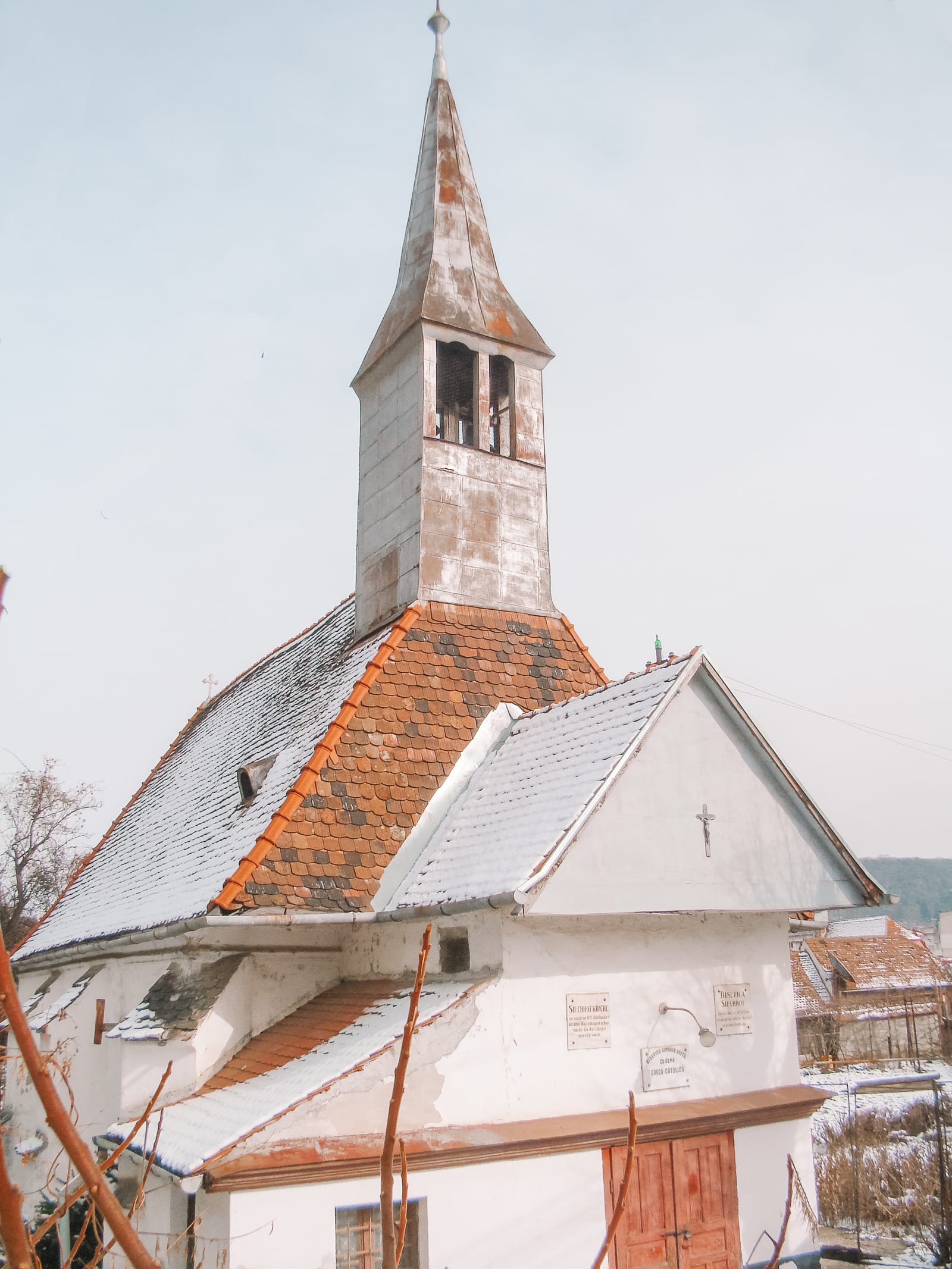 This church is also known as the Lepers’ Church as its former outside pulpit was used by the priest to preach to patients in a nearby lepers’ hospital that opened in 1507.

It was then their chapel between 1647 and 1684. They weren’t allowed inside the church as everyone feared leprosy back then, so it was the best he could do for them at the time while attempting to recover.

It’s small, but its unique history and significance make it once of the best things to do in Sighişoara, hands down. 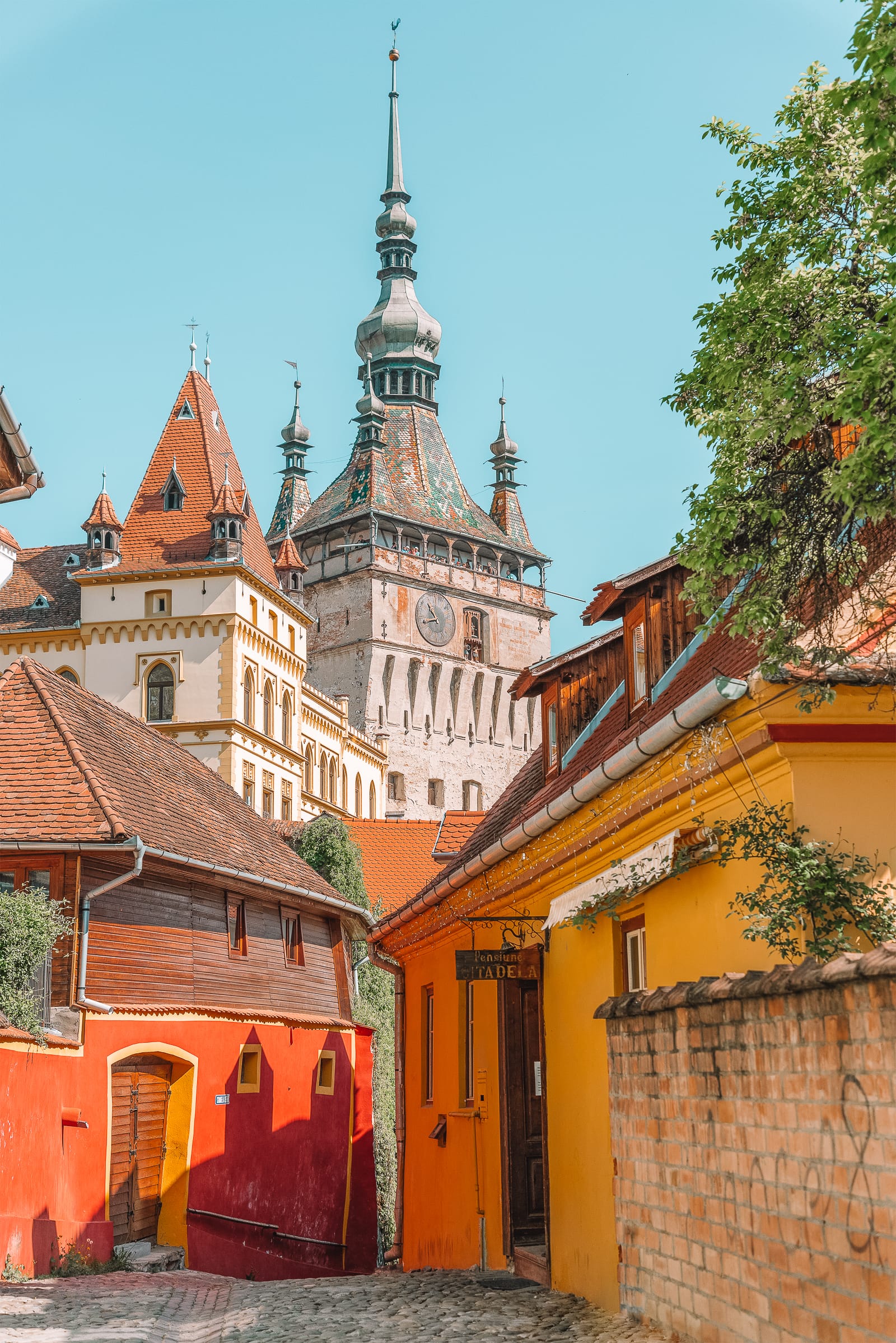 Part of the formidable citadel of the city is the most well-known of all places in Sighişoara, or, perhaps, all of Transylvania: the Clock Tower, aka the Town Hall/Council Tower.

It’s the main entrance to the citadel and sits opposite the also popular Tailors’ Tower. It was originally built in the 14th century and was enlarged in the 16th.

With its 64 meters in height, it’s easily visible all throughout the city. Being that tall, it was certainly overwhelming to attackers of the citadel in the past, which was a great thing as it’s purpose was to protect the main citadel gate.

It also was used as a town hall until 1556, and the inside has been home to the Muzeul de Istorie Sighişoara since 1899.

Easily one of best things to do in Sighişoara, the 17th-century clock is beautiful with the figures around the top, a feature known of central European clocks, and you can get some amazing pictures with it to boot!

7.) Tinsmiths’ Tower (and other towers)

The Tinsmiths’ Tower is one of the many towers that were built to defend the citadel; today, it’s one of the 9 that remain of the original 14.

It has some… odd design choices that still manage to work, with a square base leading into a pentagonal trunk, an octagonal top area, and a somewhat unbalanced and hexagonal roof, all reaching 25 meters into the sky.

It had an amazing defensive position like the Clock tower back in its glory days, and still has impressive woodwork inside, but it doesn’t do much defending these days. It also still shows some faint traces of a siege in 1704.

Now, the only remaining towers are the Blacksmiths’, Butchers’, Cobblers’, Furriers’, Ropemakers’, Tailors’, Tanners’, Tinsmiths’, and, of course, the Clock Tower. The Tailors’ Tower is well-known for causing that massive 1676 fire we keep mentioning due to an explosion of gunpowder stores. Wasn’t pretty. 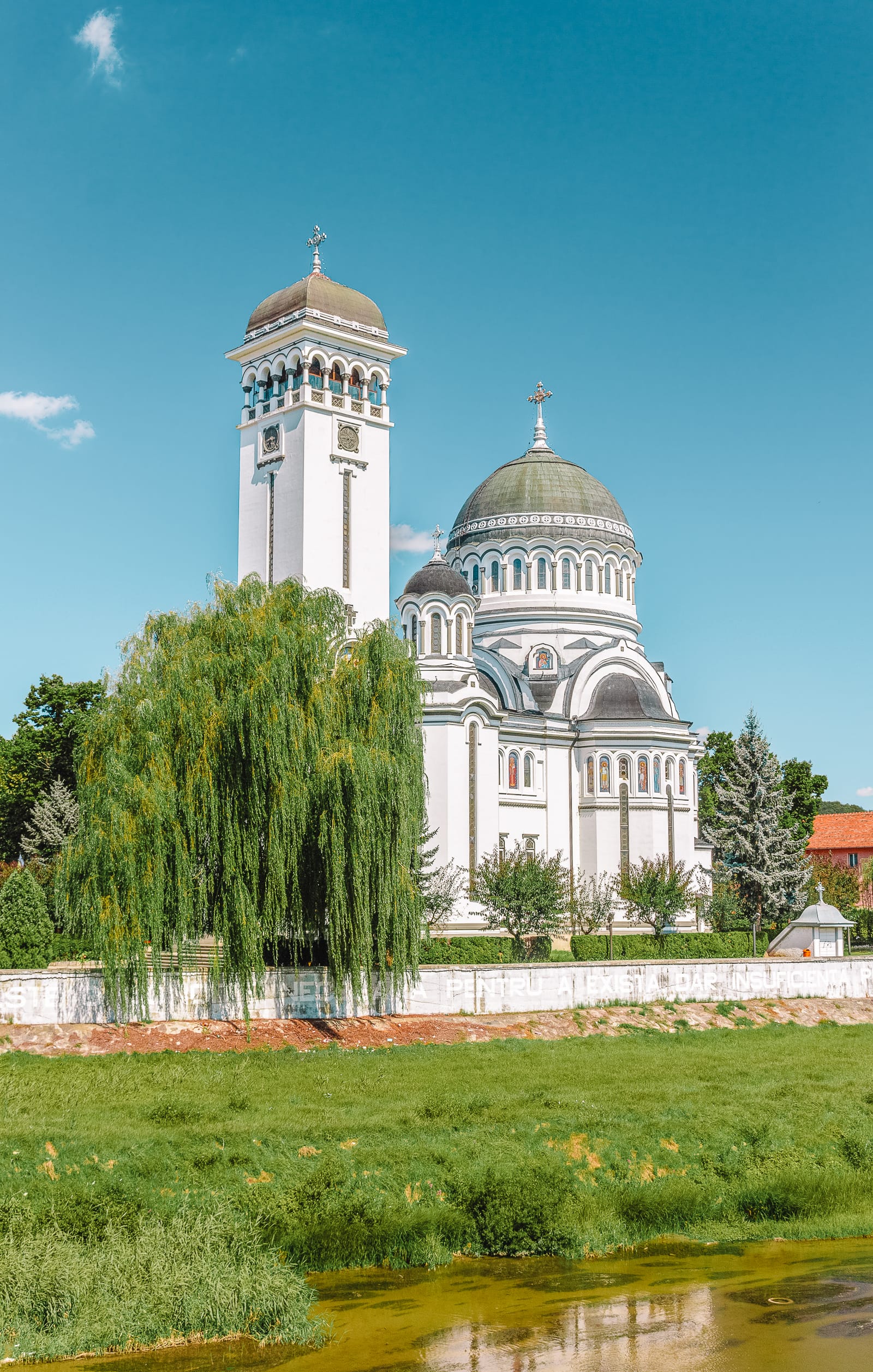 To be clear, this is a church nor is it not a cathedral, as the name might lead you to believe but instead, it’s the seat of an archpriest (not a bishop) but I digress.

The church itself is Romanian Orthodox in affiliation and is situated on the northern bank of the Târnava Mare River.

It dates back to the days after WWI when the region was no longer part of the Austro-Hungarian Empire. Dedicated to the Holy Trinity, it was built in 1934-1937, and today, its crisp church bells chime every morning and evening to make for a satisfying, spiritual visit.

The citadel of Sighişoara is impressive in itself with the 9 remaining towers, feet upon feet of walls, and two out of five bastions still armed.

Since the city was situated on a sort of border in historic times, it needed all the defence it could get, else it would easily fall back and forth between the two sides.

It held its status as a military and political stronghold for several centuries before becoming what it is today.

The statue of the man known as the real-life Dracula, Vlad the Impaler, sits on Strada Monastirii. He’s close to the city hall and another statue, this one of Sandor Petofi.

Born in 1431, he succeeded his father, Vlad II, to become king of Wallachia, the medieval area of southern Romania.

He was born in the city and was notoriously known to put his enemies up on stakes, as well as drink their blood, leading to him being called Vlad Țepeş, the Impaler in English. 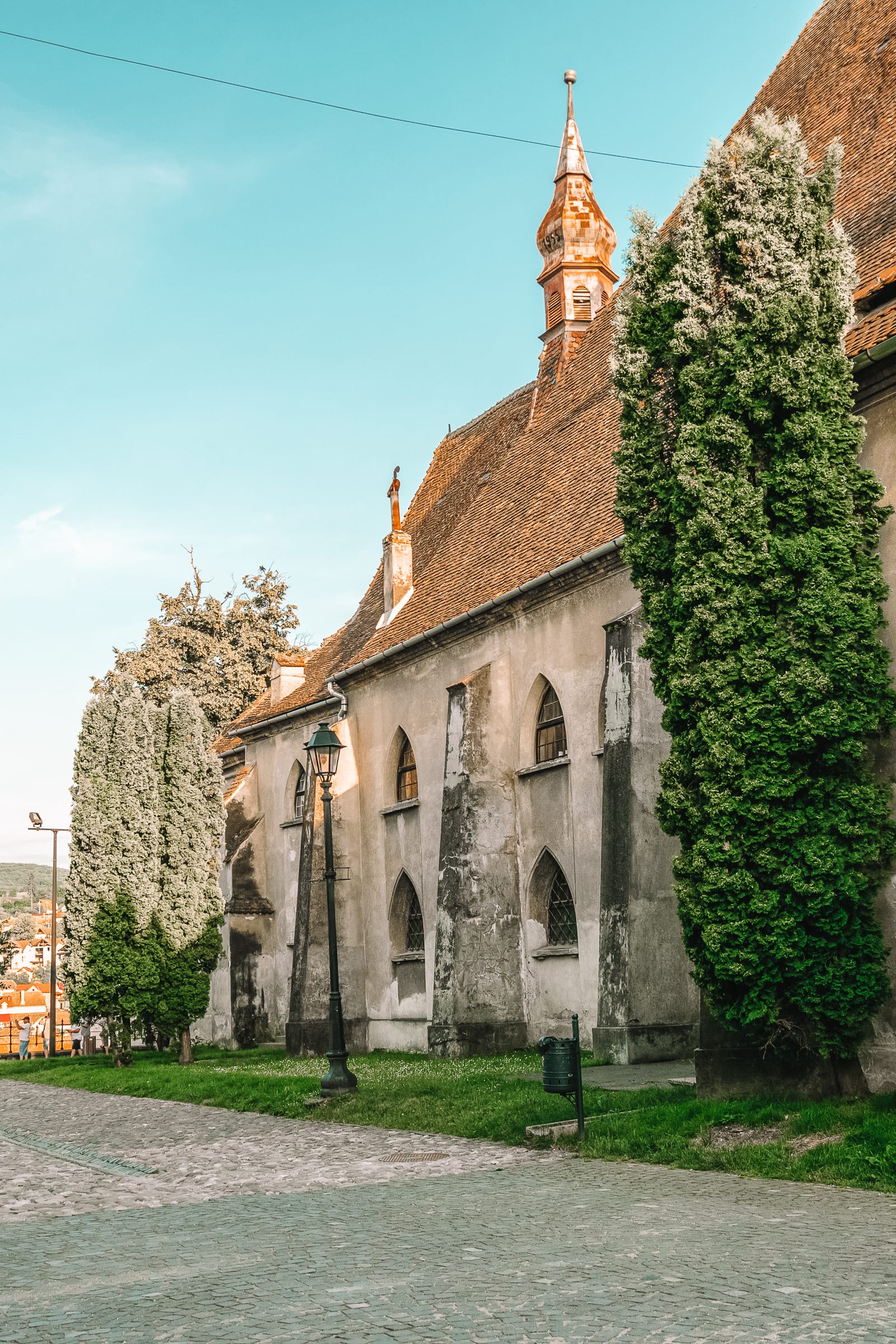 This Lutheran church is mainly an architectural delight, being built in a Gothic style in 1289 with an extravagant baroque interior.

It was originally part of a Dominican monastery until the monks stopped living there around 1550, and the monastery part was knocked down around 1888.

Where the monastery once was, there’s now the city hall, which is why the monastery was destroyed, to begin with. It’s been dedicated in the name of St. Nicholas since then and has been Sighişoara’s main Evangelical gathering place ever since.

Although construction started in the 13th century, most of what is there today is from later construction in the 15th century and some dating back to 1677-78, both times restored after some pretty major city historical events.

It’s a good symbol of the trade centre Sighişoara once was, with the Anatolian rugs inside. It was built for the city’s Germans and has changed religious affiliation as they have throughout the years from Catholicism originally, to its current denomination. 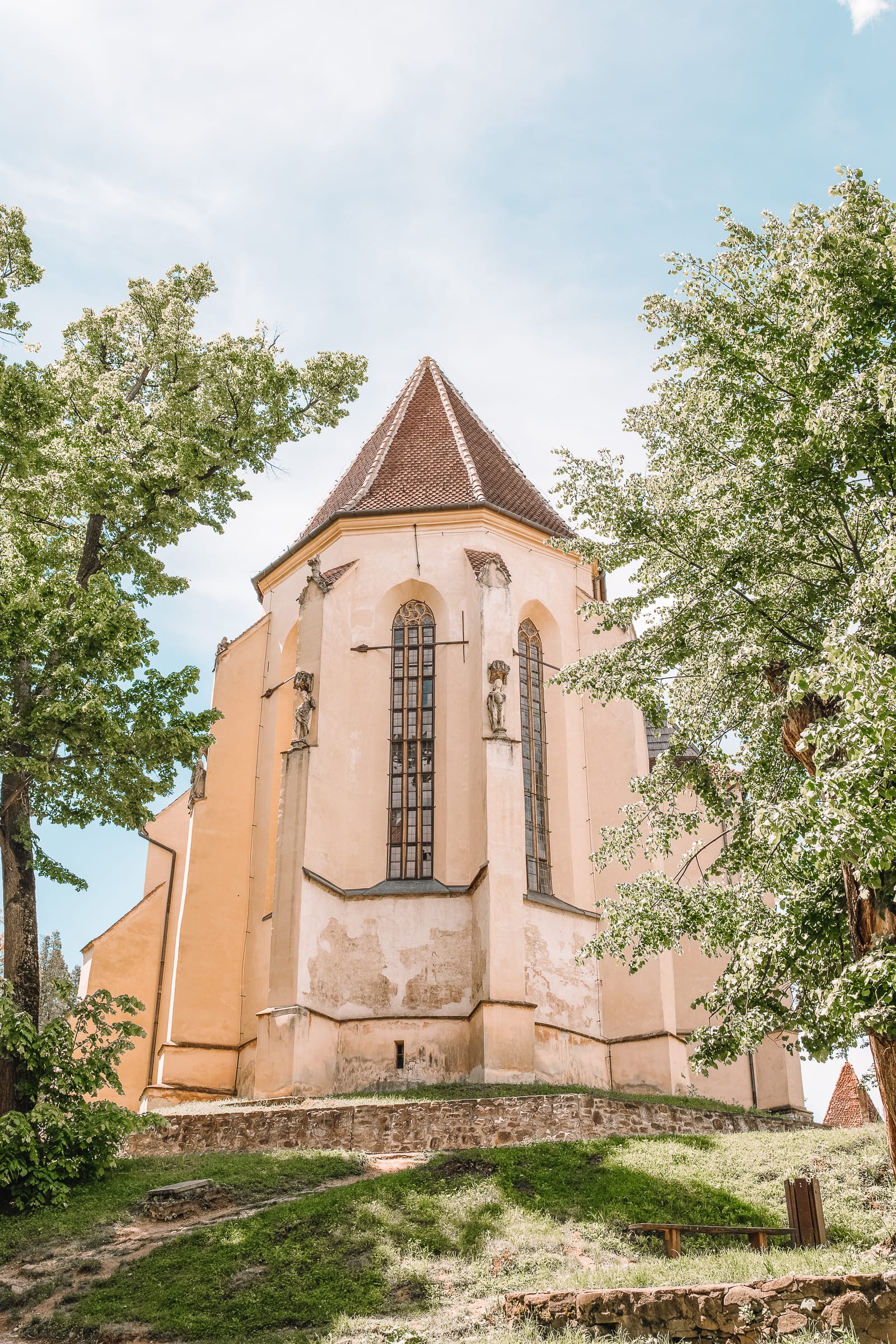 This is beside the school that the Scholars’ Stairs lead to, and is quite old for what it is (ergo why it’s one of the best things to do in Sighişoara)

It’s Gothic in style with some bits of frescos here and there, and it was originally Catholic, but became Lutheran along with the population after the 1547 Reformation. It may not look like much, but it took almost 200 years to build! 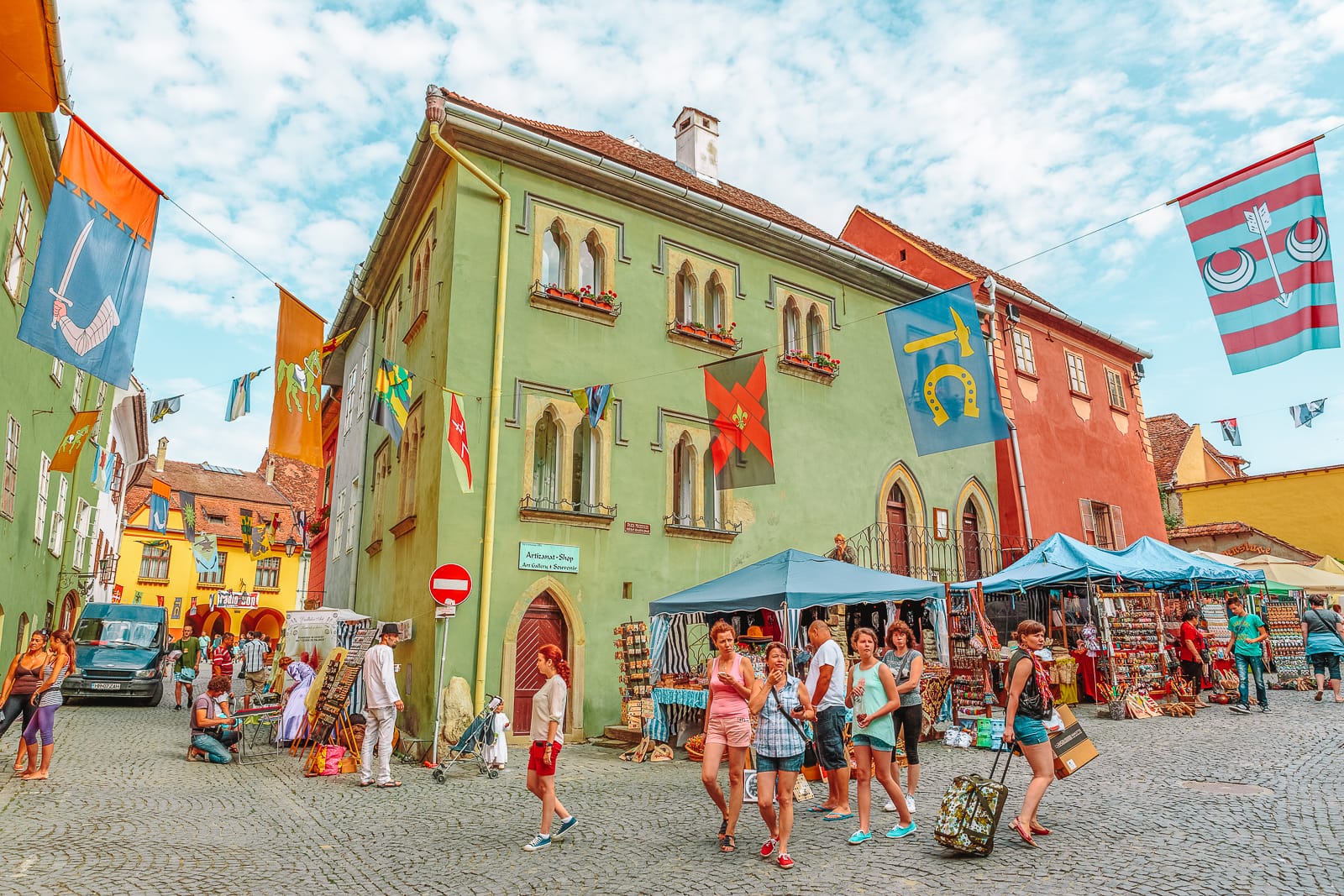 Built-in the 16th century and situated on the Piața Muzeului, this light greenhouse is well-known for its architectural uniqueness amongst the other buildings in the city.

It gets its name from the Venetian style it was built in, with its windows and other such things. Plus, it’s right beside the Dracula House, so you can easily drop by when you’re around that area. 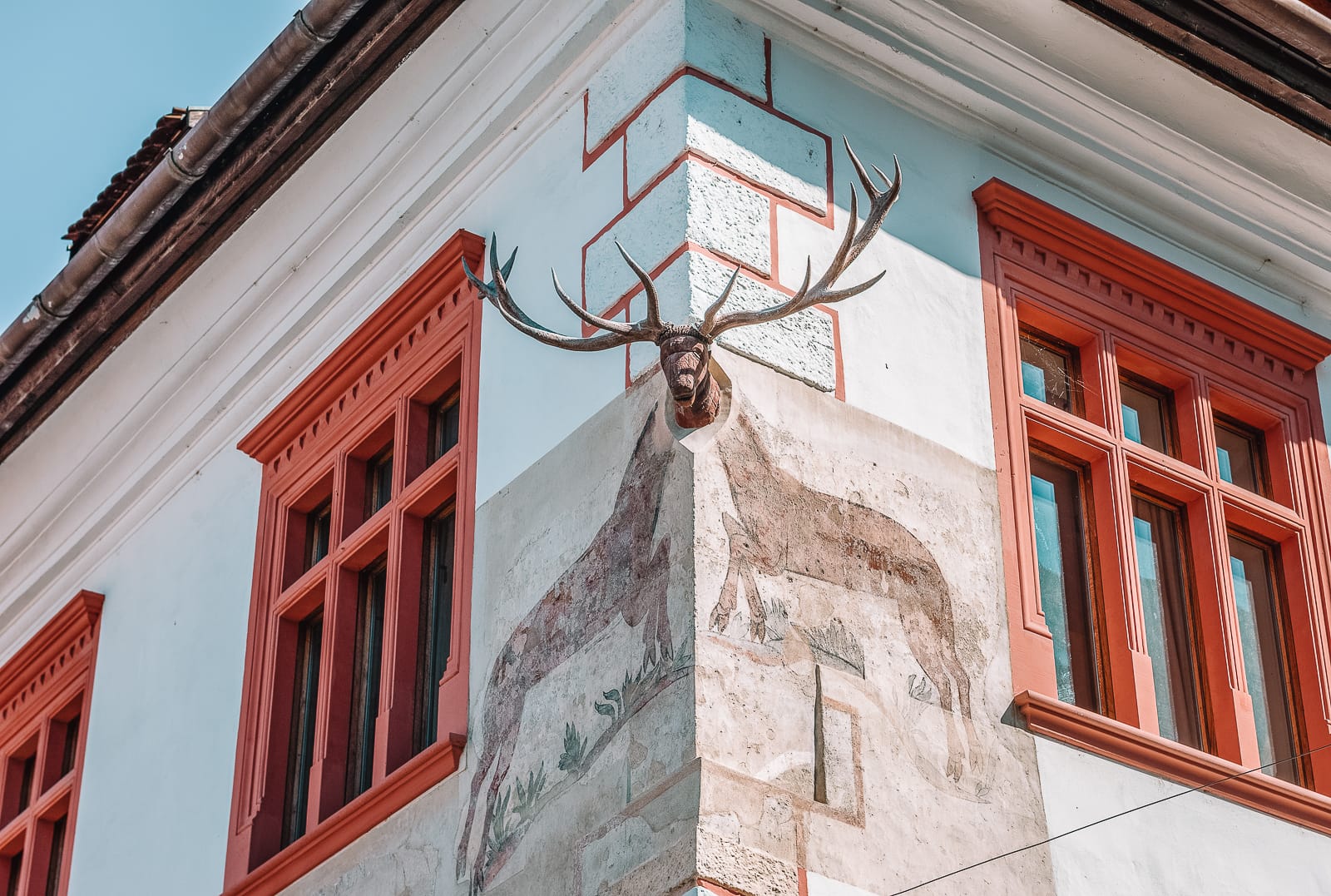 Known as “Casa cu Cerb” in Romanian, this home is now a restaurant and hotel; and a very good one at that, making it easily one of the best things to do in Sighişoara for those looking to feast on Romanian cuisine.

It was originally built in the 13th century but had to have reconstruction work done after the fire of 1676.

This church is in town for the Hungarian population and is quite popular among them. It was built in the 1890s in a neo-Renaissance style and had major restoration work done after a fire in 1983.

It’s a smaller stop compared to the other spots above but is definitely one of the best places to visit in Sighişoara and a cool little addition to your trip.

15 Best Things To Do In Kharkiv, Ukraine