Until recently, Vietnam has been somewhat of a hidden treasure for backpackers and those taking the typical South East Asia gap year with some of the best places to visit in Vietnam actually becoming a respite for travellers looking to escape the crowds.

In recent years, however, the countries government is pushing funds into tourism and many cities are experiencing a boom in overseas visitors. The appeal of Vietnam is easy to see – it is cheap, exotic, has a fantastic climate, and boasts some superb cities and villages packed full of culture and history.

From the iconic limestone structures of Ha Long Bay to the bustling cities of Ho Chi Minh and Hanoi, Vietnam has something for everyone! 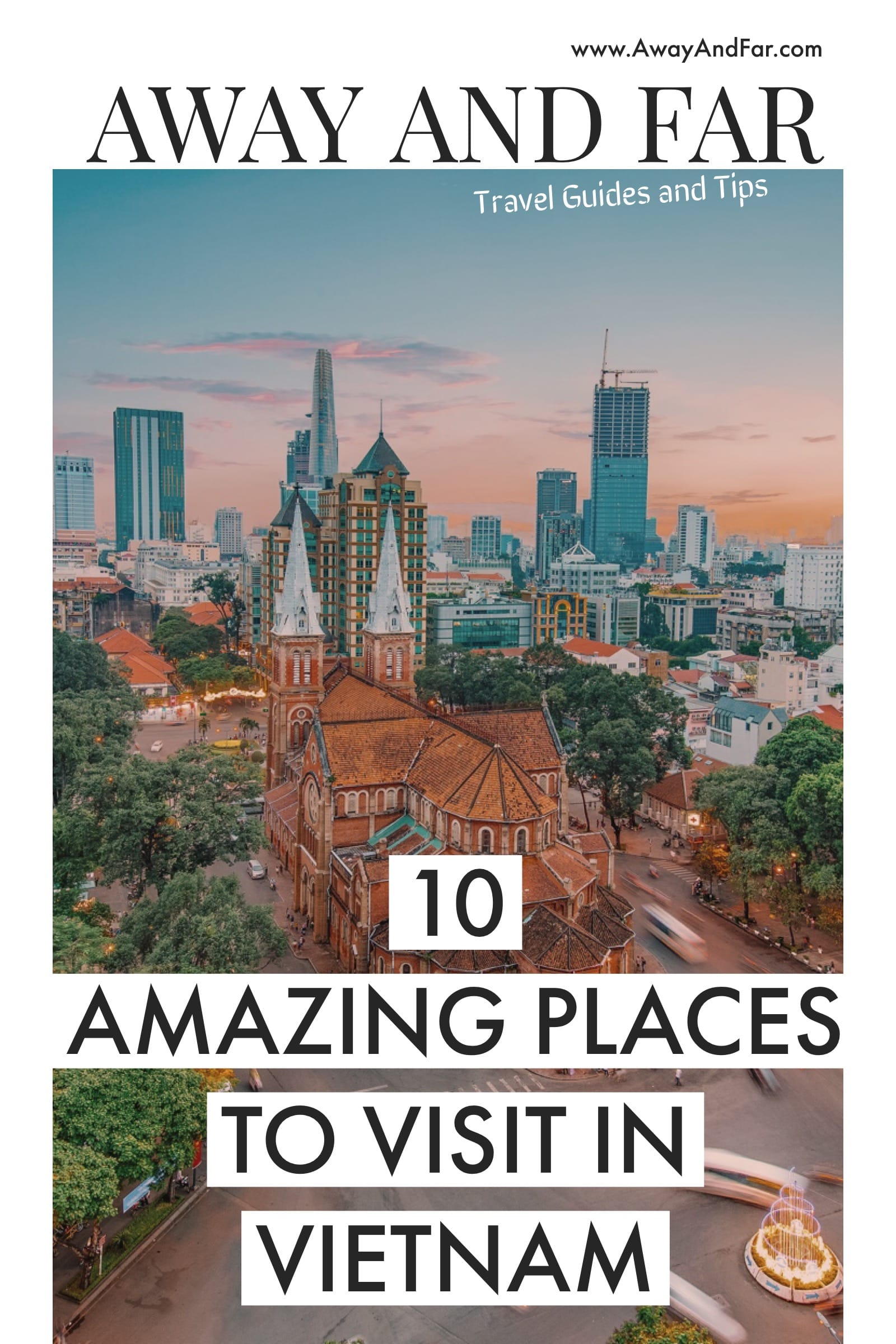 These are 10 of the best places to visit in Vietnam! 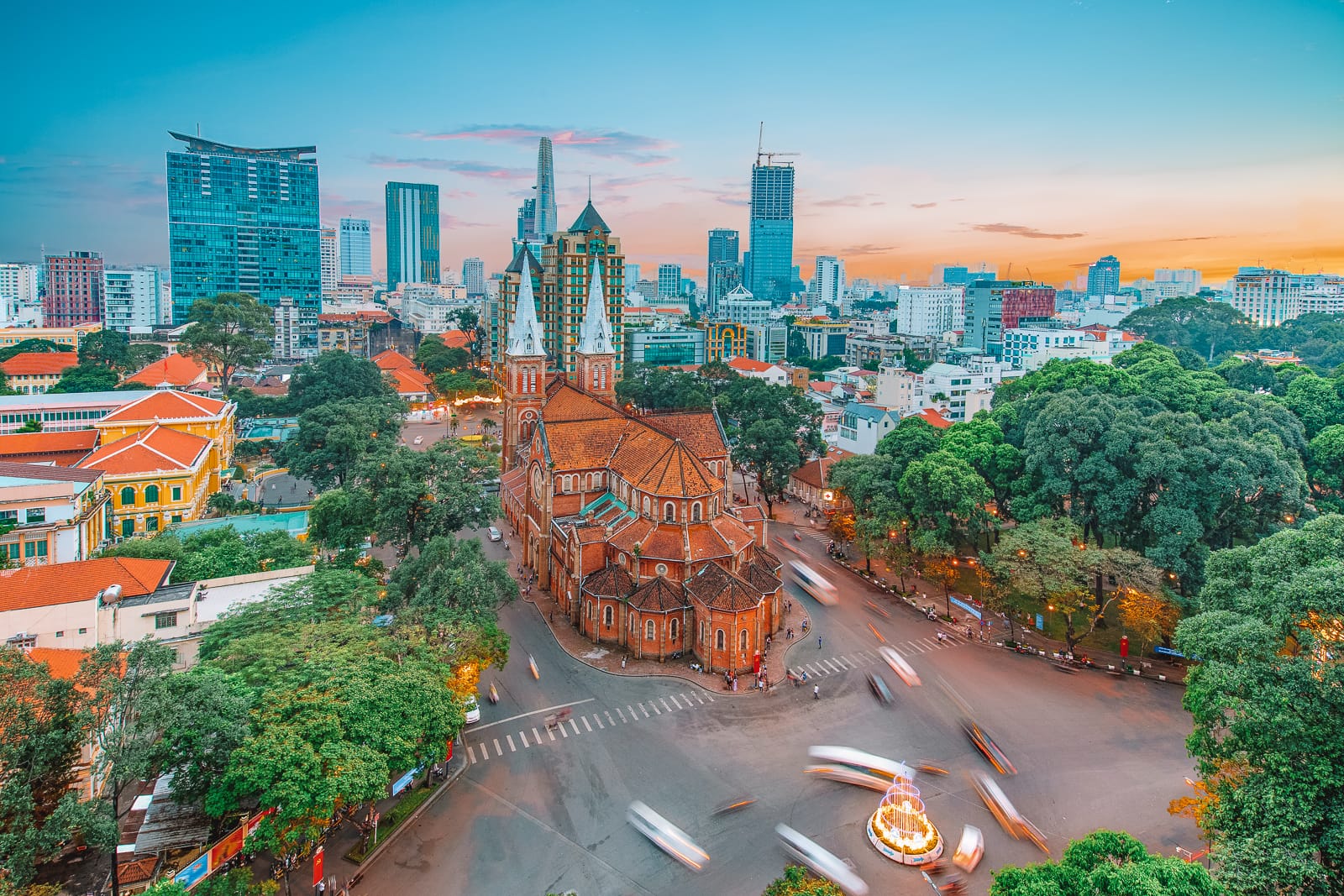 Formerly known as Saigon, this city is one of the most important in all of Vietnam and has been a central point for many influential events during its history.

As the most populous city in Vietnam, it’s easy to see why this is one of the best places to visit in Vietnam for city life.

Due to its history of colonization and influences from other cultures, Ho Chi Minh has an eclectic array of architecture such as Notre Dame Cathedral, The Opera House, and the Reunification Palace.

Furthermore, the Cu Chi tunnels present an interesting look at the Viet Cong’s tactics during the Vietnam War. 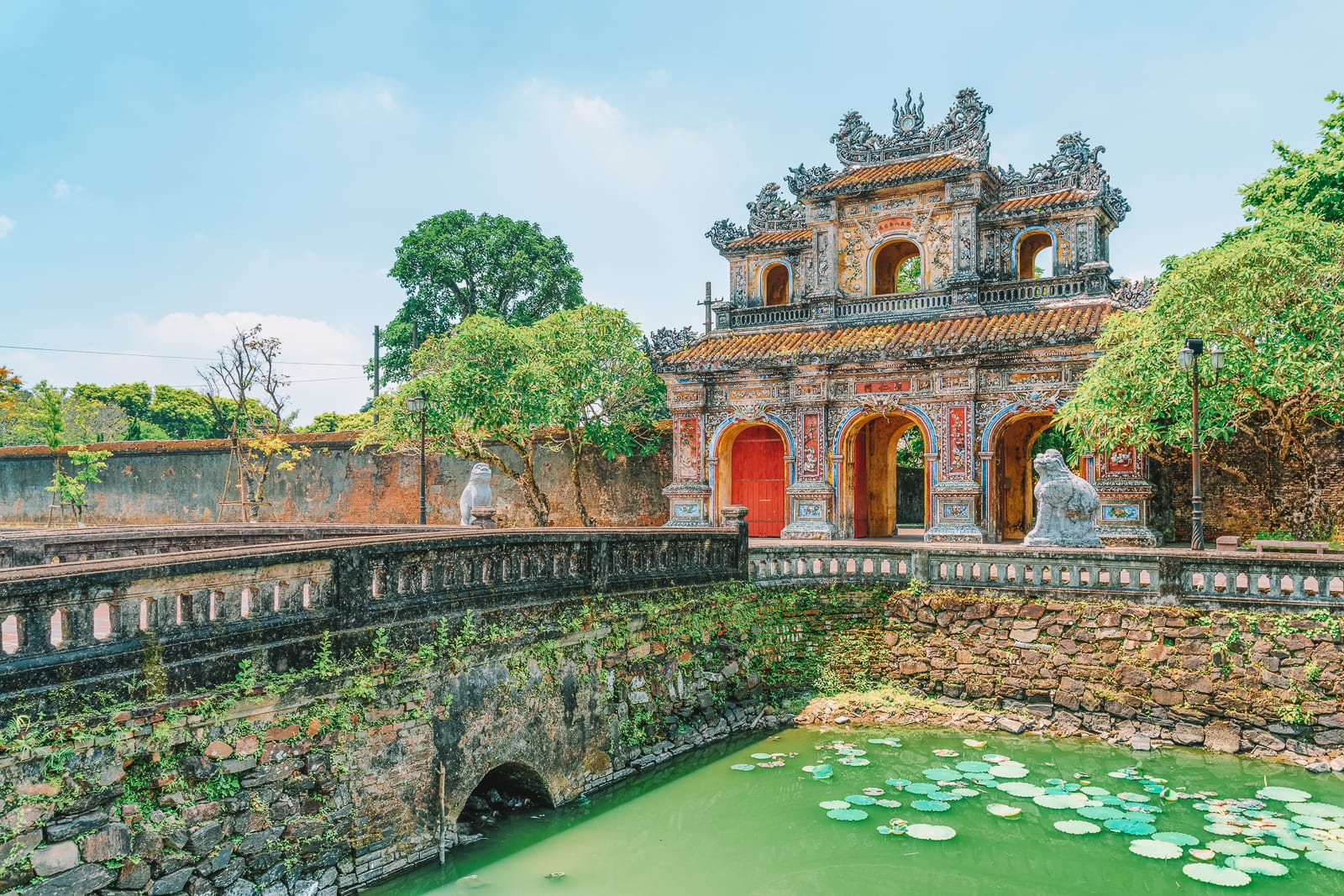 This historic city formerly served as a seat for the emperors of the Nguyen Dynasty. Today, Hue stands as a relic of ancient times and its centre has been designated a UNESCO World Heritage Site.

The Imperial City is the main attraction and it is possible to see monuments and structures such as the Meridian Gate, the Flag Tower of the Citadel and the Hien Nhon Gate. 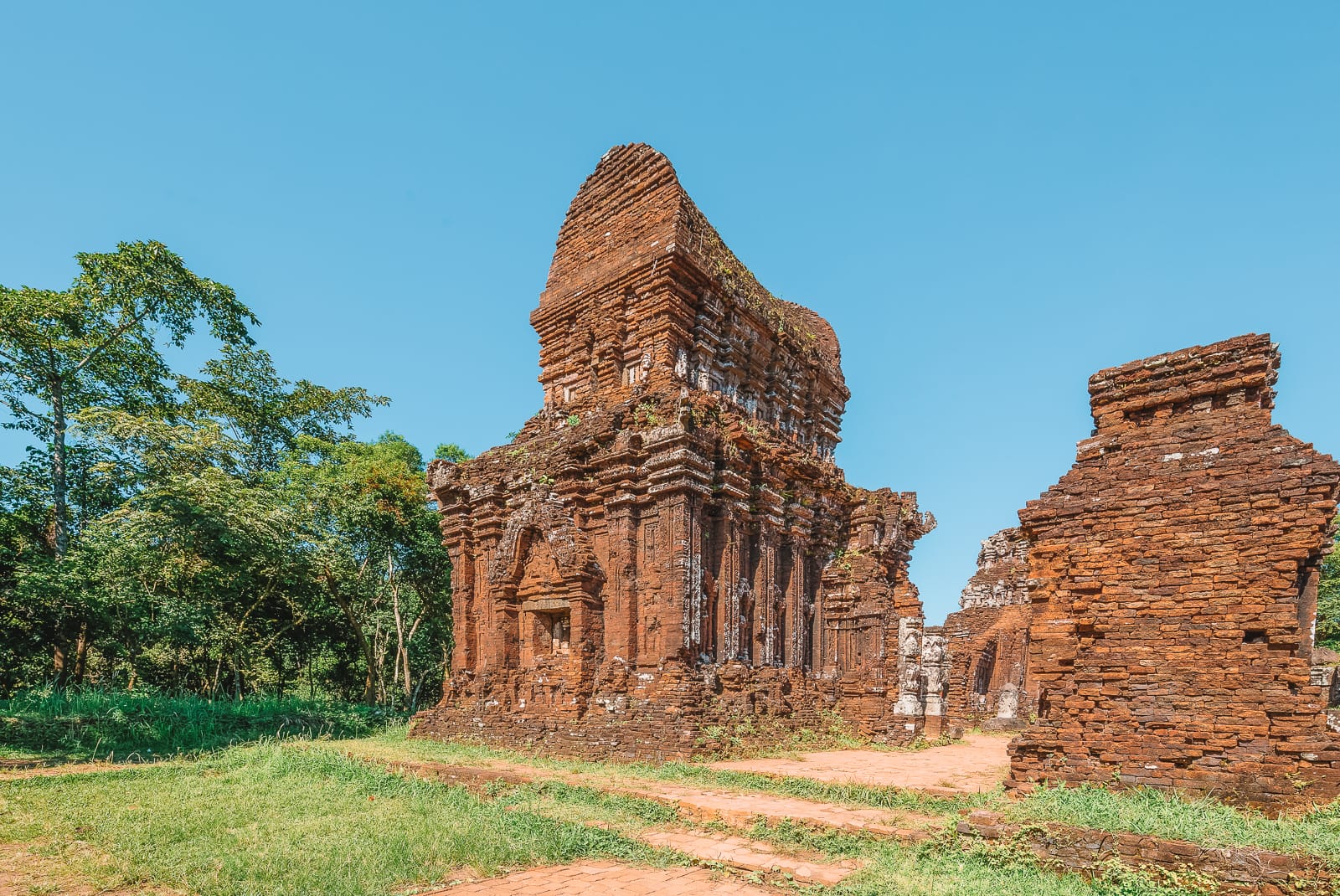 My Son is not a city as such, but it is one of the most significant archaeological sites in Vietnam and definitely deserves its spot as one of the absolute best places to visit in Vietnam.

This ancient Hindu temple complex was constructed in the 4th century AD and was dedicated to the god Shiva. Today you can explore the partial ruins and marvel at the beautiful pagodas and shrines. 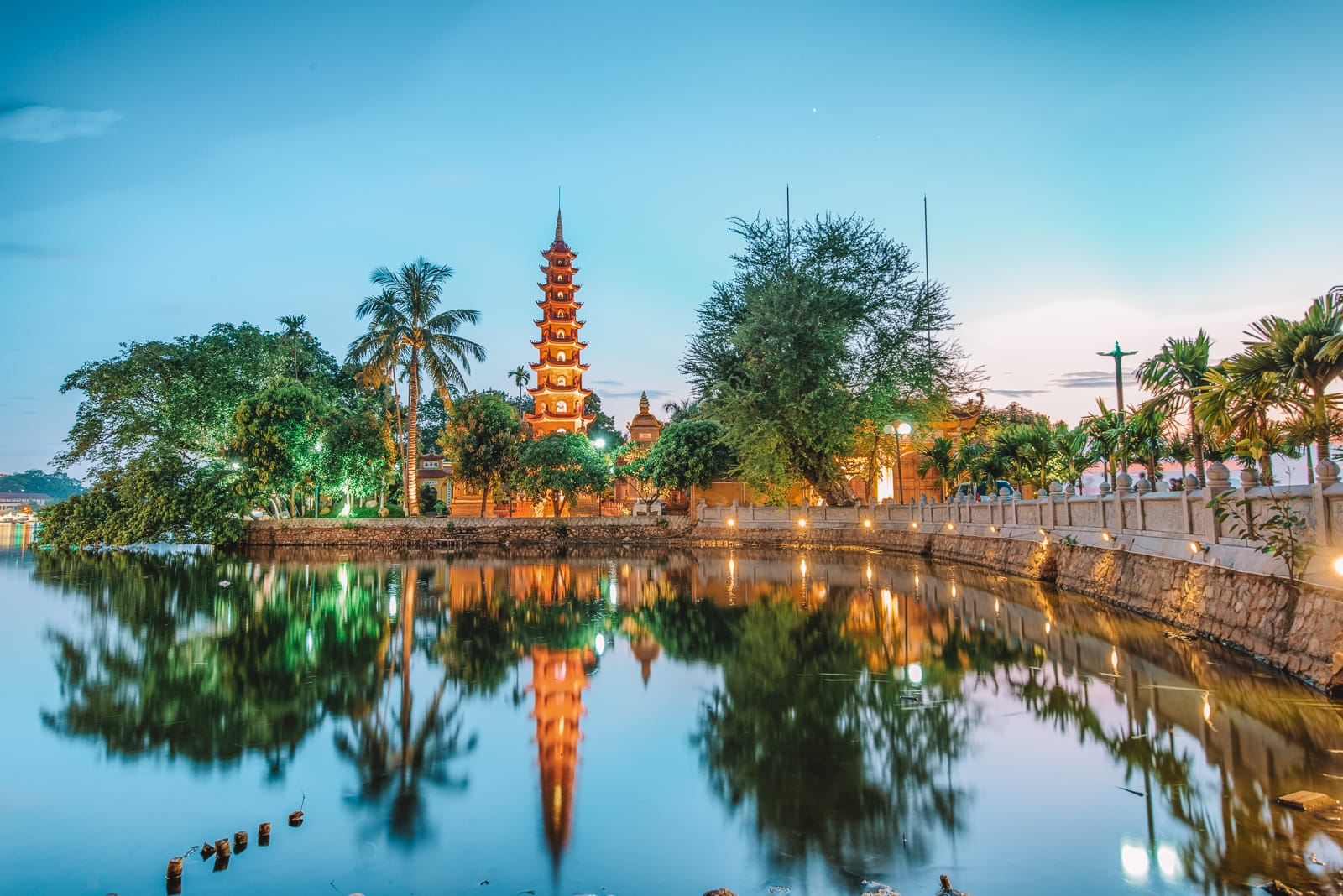 Hanoi is the current capital of Vietnam and is the second largest city by population. Located in the northern regions of the country, Hanoi has been an important settlement for over 1000 years  – a key part of why this is one of the best places to visit in Vietnam.

Within the confines of this city, you can find some spectacular sites such as the Long Bien Bridge, the Perfume Pagoda, and Turtle Tower.

Furthermore, no trip to Hanoi would be complete without visiting the Mausoleum of the countries revolutionary leader Ho Chi Minh. 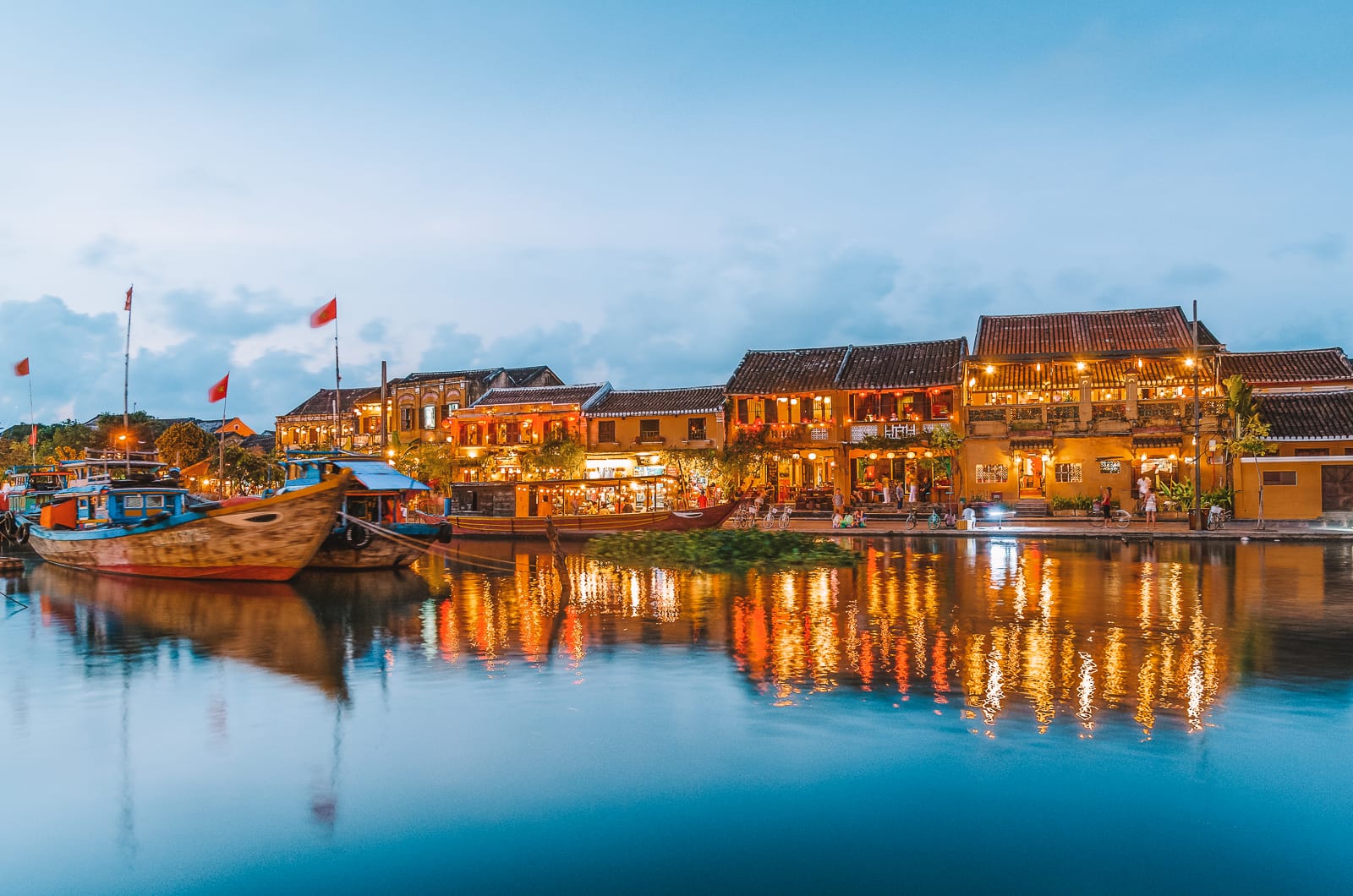 Located in the central province of Quang Nam, Hoi An is a beautiful city and its historic district is one of the best-preserved examples of a mid-century trading port.

Due to the various colonial influences, Hoi An has a myriad of architectural styles and its streets are truly fascinating to wander through.

Aside from exploring the old city, Hoi An also has some superb museums that detail the city’s history and culture. 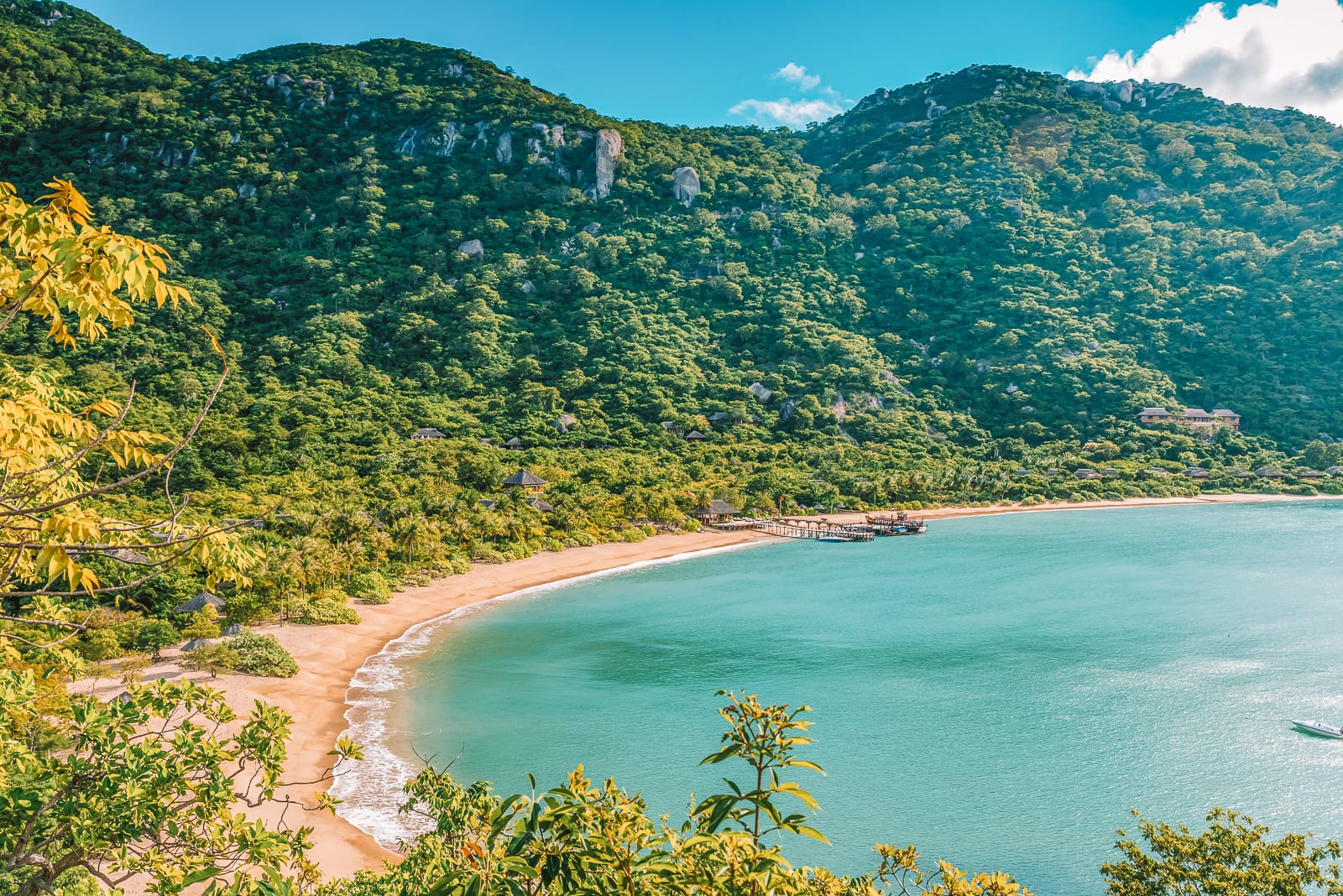 Nha Trang is an awesome coastal city that boasts some fantastic beaches and some sublime historic architecture. If you enjoy watersports and scuba diving, you will simply love Nha Trang.

Furthermore, the bay itself is considered one of the most beautiful in the world due to its picturesque scenery.

Aside from the beaches and sea, other attractions include the great Buddha Statue, Vinpearl Waterpark, and the Tram Huong Tower. 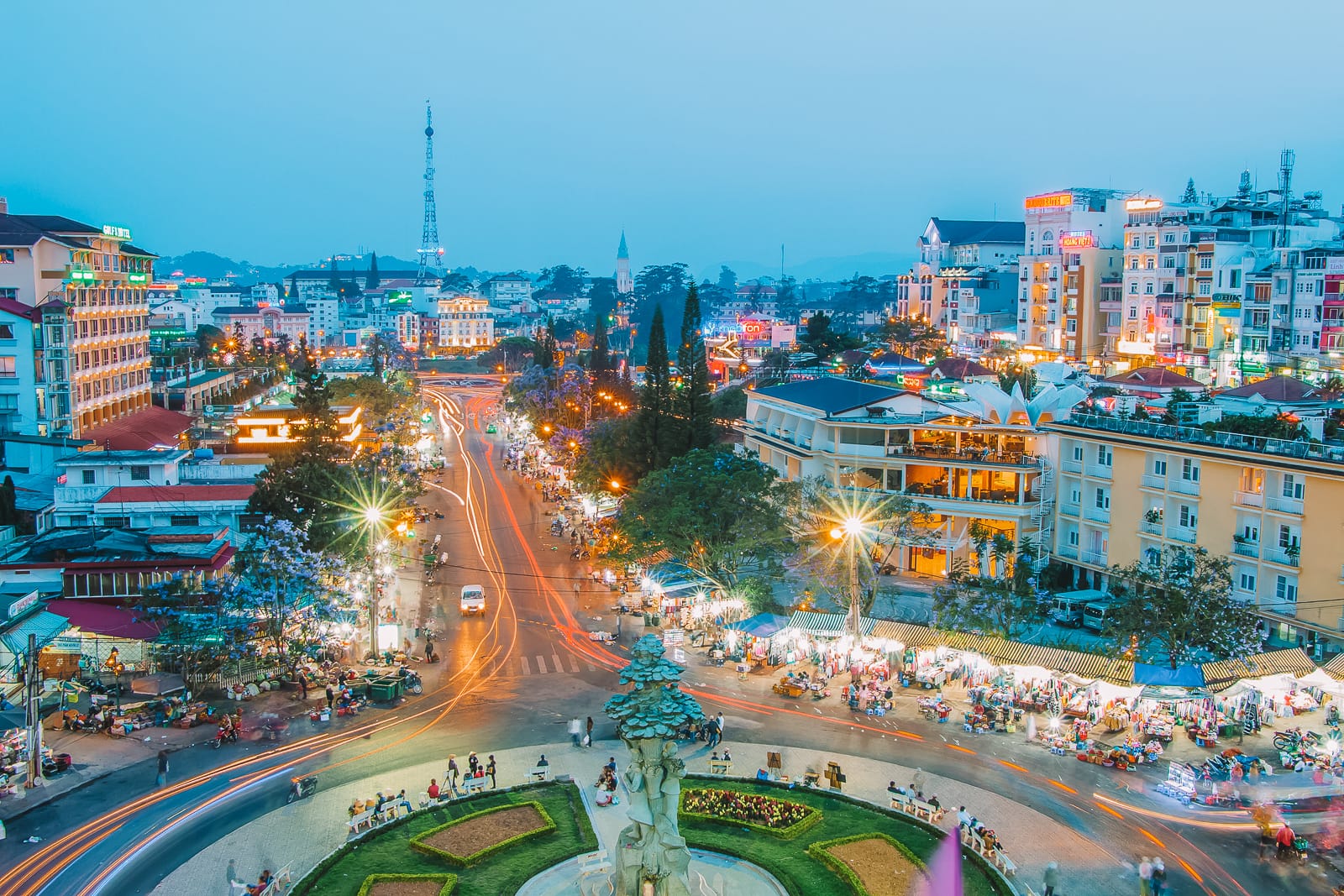 Da Lat is a magnificent destination in the central southern regions of Vietnam and is renowned for its breathtaking scenery and pine forests.

When visiting Da Lat and the surrounding region, you can see traditional coffee terraces and of course the immense pine forests that make this city famous.

If you can, be sure to visit the city during the popular Flower Festival and take a trip to the bustling Market Square at night time. 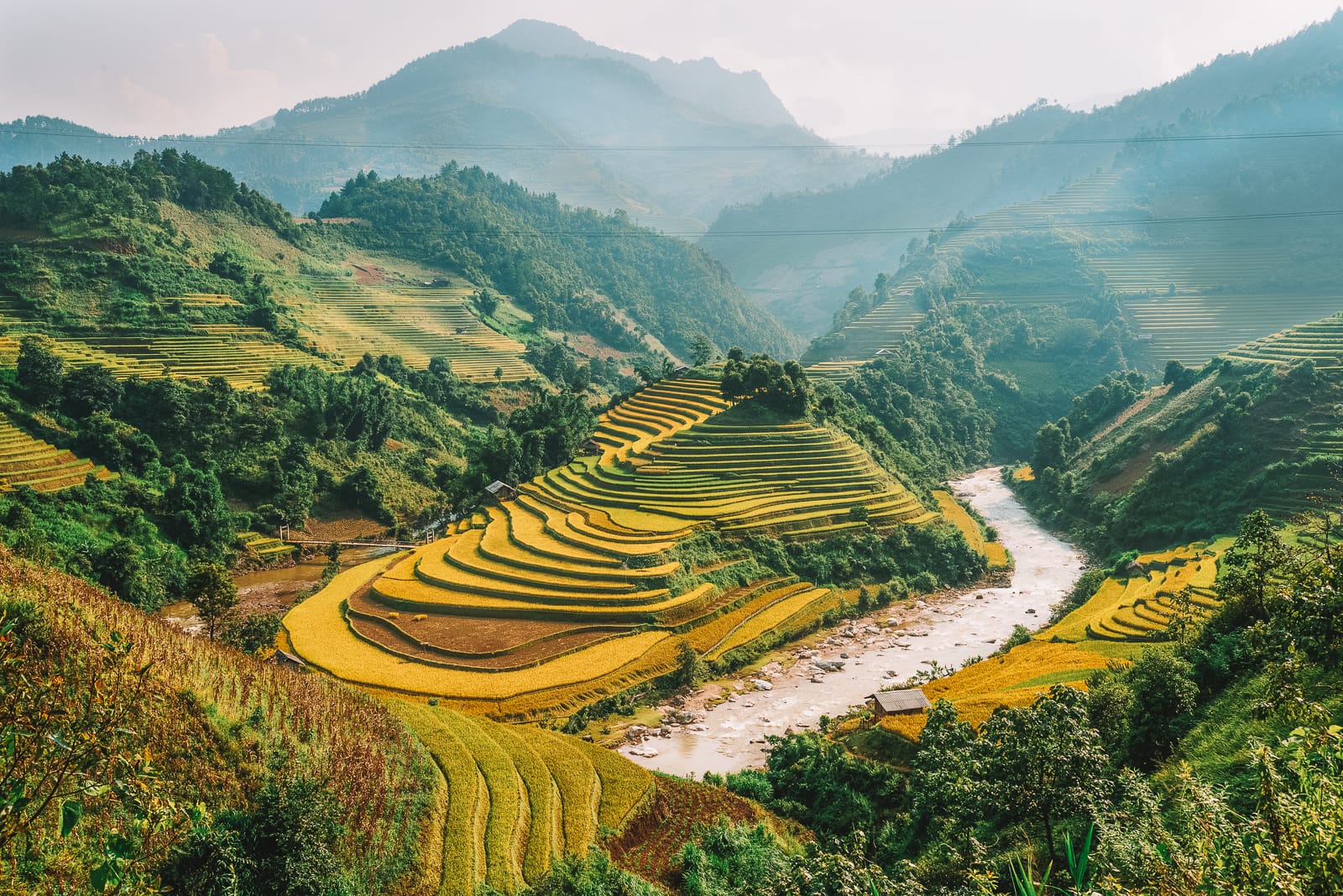 Located high up in the northern regions of Vietnam, Sapa is a hidden gem and sits close to the Chinese border.

This town is located in the mountains and is surrounded by gorgeous rice terraces that sprawl across the hills.

A trip to this settlement will give you a slice of true rural Vietnamese life and show you how the locals make a living and survive. 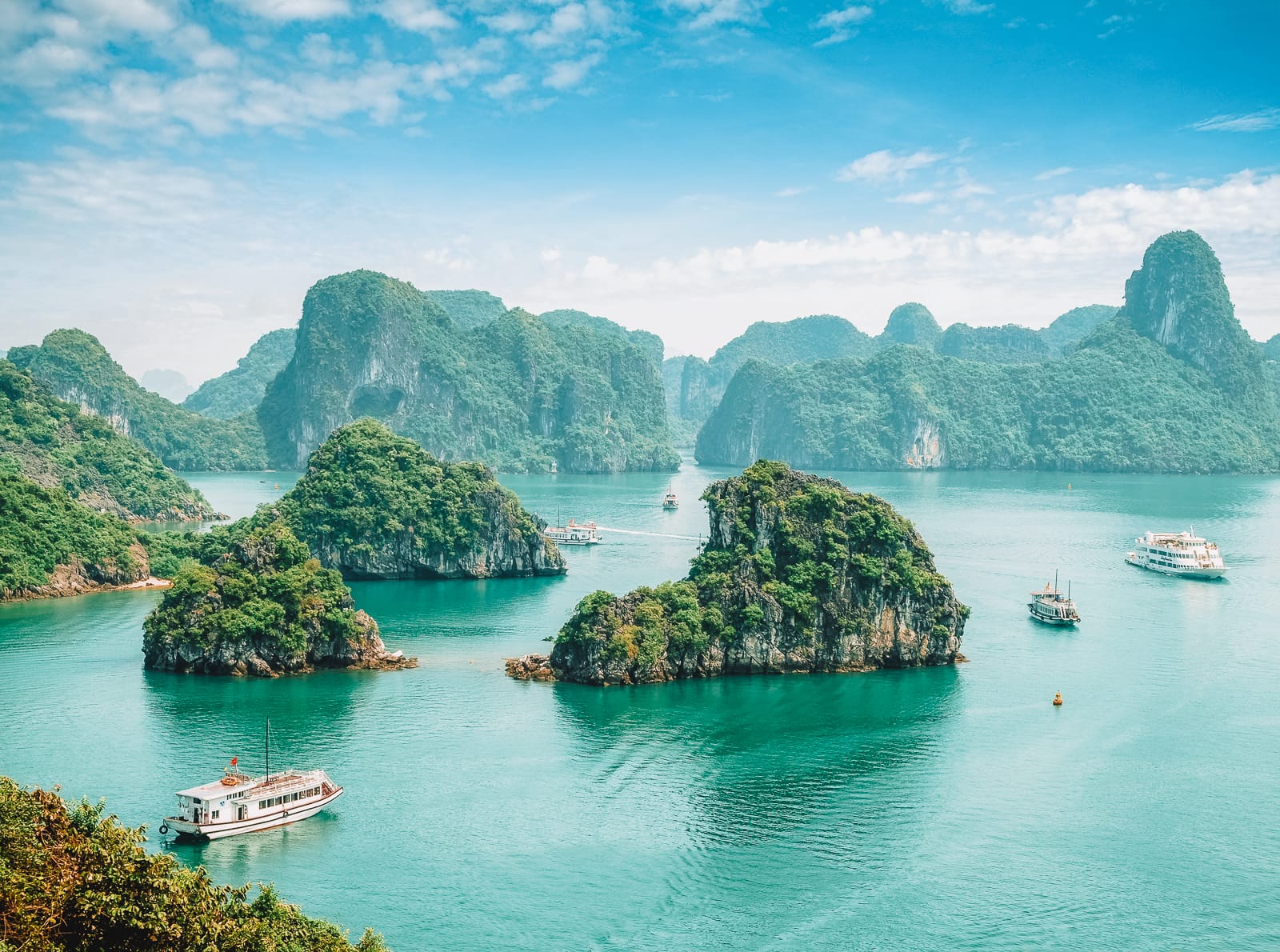 This breathtaking bay in the Quang Ninh Province needs no introduction and it is often listed as one of the most beautiful spots in the world and is hands down of the best places to visit in Vietnam.

Throughout the bay, you can see the iconic Karst pinnacles and a myriad of floating villages.

There is possibly no better way to explore Ha Long Bay than via a long tail boat trip – consider visiting at sunrise or sunset for a truly magical experience. 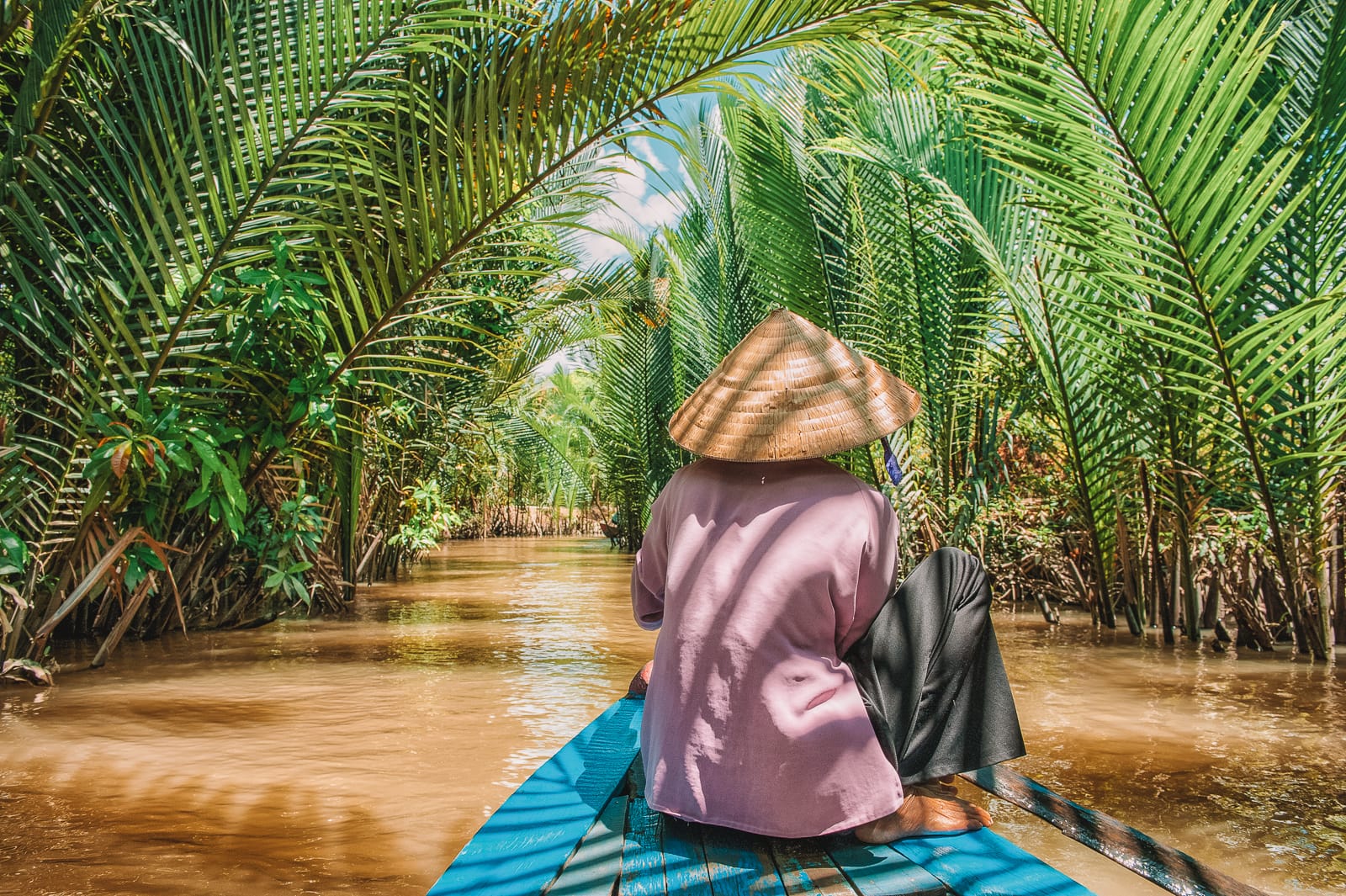 You can find this city in the far southern parts of Vietnam on the Mekong Delta in the province of the same name. Ben Tre played an influential role in the Vietnam War and now boasts a rising tourist industry.

Bien Con Bung beach offers a beautiful place to relax whilst the Vam Ho Bird Sanctuary provides a chance to see some unique and interesting wildlife.